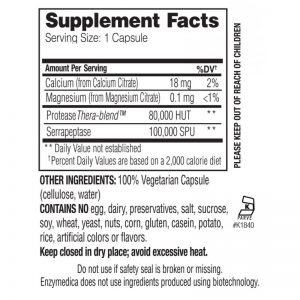 Serratiopeptidase: Serratiopeptidase (serrapeptase) is a proteolytic enzyme originally discovered in the digestive tract of the Japanese silk worm but is now derived almost exclusively from bacteria of the genus Serratia strain. Serratiopeptidase has proven to be effective in improving circulation, speeding tissue repair, alleviating joint discomfort, supporting cardiovascular health, relieving respiratory complaints and having anti-edema qualities. Serratiopeptidase has even been shown effective in transferring antibiotics to the site of infection and is now widely used in Germany as an alternative for many of these issues. It has such broad ranging effects because of its possible mechanisms of action. There are three ways Serratiopeptidase is believed to act:

Protease TheraBlend: Enzymedica’s Protease Thera-blend has had long running success both digestively and therapeutically. Protease given therapeutically may be involved in many different types of healing in the body including the digestion of protein pathogens, increasing circulation, eliminating waste and supporting the immune system.

Mineral Blend: The mineral blend found in SerraGold makes taking a high dose proteolytic formula easy on the stomach. It consists of calcium / magnesium ratio of 2:1 along with numerous trace minerals.

Be the first to review “Enzymedica SerraGold, 120caps.” Cancel reply